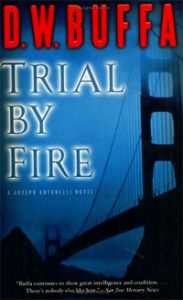 Synopsis:
Attorney Joseph Antonelli finds that murder can be a very public affair-in this moody and scintillating novel of love, loyalty, and revenge in the Edgar Award-nominated series.

Joseph Antonelli’s never lost a case he should have won… until now.

Julian Sinclair is a brilliant young man-already a law professor at Berkeley and a respected scholar-yet, bored with academic life, he joins the famed defense attorney Joseph Antonelli in private practice. But Sinclair is also a man with powerful emotions he keeps in check. When the beautiful Daphne McMillan, a married district attorney, is murdered, Sinclair is accused of killing her in a fit of jealous rage. Antonelli believes beyond a doubt that this simply isn’t possible. Yet Daphne’s widowed husband, a man of wealth and privilege, and a master of manipulation, thinks he can sink both this idealistic defendant and the cool Antonelli with one fell swoop.

Is Joseph Antonelli in danger of losing more than the case when he baits the real killer to come out of hiding? And when the case is decided and a man is sent to prison, how is Antonelli to know that the real mysteries of the murder are just beginning to be revealed? And that the person no one suspects is the very person even Antonelli should fear the most?

“…the fast-moving dialogue and fine sense of characterization keep the reader hanging on for the ride.”
— Wendy Sherman, Publishers Weekly

“He definitely is hitting on all cylinders… combining a gripping murder mystery with insightful commentary on the state of public discourse about the law.”