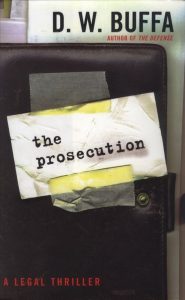 Superstar defense attorney Joseph Antonelli has made his reputation by winning at any cost, watching the wheels of justice turn, outguessing every turn and every lurch, and beating the opposition. Now he’s come out of retirement to win again. Only this time his job is not to defend, but to prosecute– to send a Deputy District Attorney to death row for the crime of murder for hire.

In a torrid case of violence, adultery, and betrayal, lies compound lies, truths defy belief, and finally, one murder leads to another.

Finally Antonelli realizes that in this case the wheels of justice are warped by money and power. And putting the right person away isn’t just a matter of law, it’s a matter of survival…

“If you liked D.W. Buffa’s debut legal thriller The Defense, you should love this sequel. It’s virtually the same blend of courtroom razzle-dazzle and backstage manipulation, beautifully written, and studded with deep philosophical thoughts…”