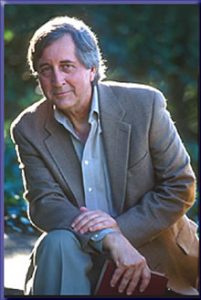 DW Buffa was born in San Francisco and raised in the Bay Area. After graduation from Michigan State University, he studied under Leo Strauss, Joseph Cropsey and Hans J. Morgenthau at the University of Chicago where he earned both an M.A. and a Ph. D. in political science. He received his J.D. degree from Wayne State University in Detroit. Buffa was a criminal defense attorney for 10 years and his seven Joseph Antonelli novels strive to reflect, from his own experience, what a courtroom lawyer does, the way he (or she) thinks, and the way he feels about what he does.

Buffa had been writing for pleasure for many years when Henry Holt and Co. decided to publish his first novel, The Defense, in 1997. The week it was published, Christopher Lehmann-Haupt, the literary critic of the New York Times, called The Defense‘an accomplished first novel” which ‘leaves you wanting to go back to the beginning and read it over again.”

The Defense was followed by The Prosecution and then The Judgment, which was one of the five books nominated in 2002 for the Edgar Award as best novel of the year. While the first three novels are set in Portland, the author’s fourth novel, The Legacy, takes place in San Francisco and is as much a political thriller as it is legal thriller. Star Witness tells the story of Stanley Roth, one of the most powerful men in Hollywood, who is charged with murder of his famous movie star wife.

Breach of Trust, published in 2004, was considered by one critic as “one of the few books that fifty years from now will really matter.” It offers readers a scintillating look at Washington politics. Buffa’s seventh Joseph Antonelli novel, Trial by Fire, was released in 2005; in this latest Antonelli book, the focus is on the media and the role that television “Talking heads” increasingly play in very high profile criminal cases. Publishers Weekly says of Trial by Fire, “In this intelligent, gripping legal thriller… fast moving dialogue and fine sense of characterization keep the reader hanging on for the ride.”

The author’s last several novels reflect a subtle shift in storyline from D.W. Buffa’s original ‘judicial’ arena into the the broader one of politics. Buffa has built a new series around protagonist Senator Bobby Hart, an Antonelli-type everyday hero of strong moral fiber who is willing to take on “The Establishment” for the betterment of his constituents…