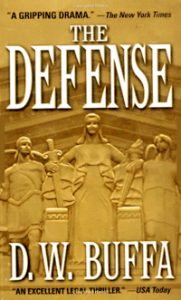 “Not Guilty” is the only verdict clients of criminal defense attorney Joseph Antonelli have ever heard. A courtroom genius and champion of the guilty and innocent, Antonelli doesn’t object when Judge Leopold Rifkin, his mentor and old friend asks him to defend a morally bankrupt, vulgar and sleazy drug abuser accused of raping his stepdaughter.

While the favor doesn’t take a toll on Antonelli immediately, the storyline spans a decade and lets the reader see how the lawyer’s involvement in the case comes back to haunt him, forcing him to question his own actions and ethics.

“An accomplished first novel… it ends with a couple of twists that are really shocking. And it leaves you wanting to go back to the beginning and read it again.”
— The New York Times

“There are occasional echoes of Scott Turow and John Grisham in this debut thriller by Oregon lawyer D. W. Buffa, but for the most part his voice is as refreshingly original as the sinuous plot line. “I never lost a case I should have won, and I won nearly all the cases I should have lost.”

…Under Buffa’s sly direction, these twists and turns add up to a wonderfully rich story. “