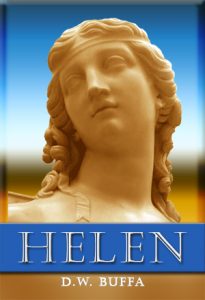 Helen is a novel about ancient Greece from the age of Pericles to the end, or what was tantamount to the end, of the Peloponnesian War. Thucydides wrote the history of the war and Plato wrote the dialogues which, along with the writings of Xenophon, are the main sources of what we know about Socrates and the origins of Greek philosophy. There are only a few allusions to the war in what Plato wrote and the history of Thucydides never mentions Socrates. Helen attempts to combine both the war and this new thing, this new way of looking at the world, which Socrates brought into being. Helen is the story of what Socrates was and what Athens became, the peak of ancient history and the peak of ancient, and perhaps not just ancient, thought, both of them together the origin and source of western civilization. No one has attempted to write such a novel before. The story is told through the eyes of a young woman, Helen, the daughter of the tyrant who ruled over Syracuse, the dominant city in Sicily. With the help of Herodotus, from whom she learns that there are different nations with different ways of life, a lesson which leads to the question about what the best way of life might be, she escapes the violence of her father. She finds a home with Empedocles, the pre-Socrates philosopher who for a time was the leader of the democracy in Agrigento, the second leading power in Sicily. From Empedocles she learns what the various pre-Socratics taught, but none of this satisfies her desire to understand the world. When Empedocles is forced to flee Sicily, she finds her way to Athens where she becomes the close confidant of Aspasia, the wife of Pericles. The first time she is invited to their home, she meets Socrates, the strangest man she has ever seen, and Alcibiades, who is easily the most attractive. Helen, a young woman of astonishing beauty and intelligence, is able to see everything that happens and through her relationship with Alcibiades and Socrates, to understand the real meaning of what she sees…

“A major change of pace for Buffa fans who might be looking for another Joseph Antonelli drama. “Helen” is a fascinating story of an entirely different sort: a first-person account of life, love and war in ancient Greece. Few writers could present Sophocles, Alcibiades and Pericles as vibrant, imperfect and brilliant characters. Few people understand this era as well as Buffa. Written from the point of view of a most unique and beautiful woman, he brings life to this significant moment in world history.”

“Rather than a departure from his legal dramas, this novel takes Buffa’s renowned focus on character development to a new level, this time with the backdrop of Athenian politics and the Peloponnesian War.
Through Helen’s eyes the reader meets a number of prominent philosophers and statesmen, including Socrates, Euripides, and Pericles.
The novel is an engaging read, teaching its readers a bit about history but more about the mind of man.”