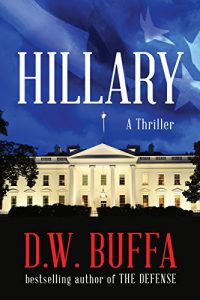 Read this Review on BookReporter.com

It’s nice to see D.W. Buffa back. Actually, he’s never really been away. Buffa, one of our smartest, most literate thriller authors, has gone largely underappreciated recently. Some years ago he wrote a series of courtroom thrillers featuring attorney Joseph Antonelli that are still highly prized by those who read them. He has written a number of stand-alone works since then, all of which deserve to be read, and widely so, for different reasons. His new novel displays all of his considerable talents in full force and should bring him back into the bright spotlight that he has earned and thus deserves.

HILLARY eschews the legal arena that Buffa so thoroughly explored in his Antonelli books. It is instead a political thriller, one that keeps the bullets to a minimum in favor of a more cerebral narrative. That is not to say that it lacks suspense or indeed thrills. It is loaded with them, thanks to a couple of ticking clocks that Buffa inserts into the plot. It begins with the death of a sitting President of the United States. Robert Constable is lying in bed when he passes away, and not with his wife. The young woman with whom Constable is intertwined when he dies is quickly ushered away by the Secret Service agent on duty. It is not discovered until shortly after that the President’s death is not the result of overexertion but rather of foul play. The woman, of course, is long gone. The malicious element of the President’s death is kept secret for a number of reasons, though rumors are slowly beginning to leak the truth.

“HILLARY is as good as it gets. Buffa perfectly captures the public and private personas, moods and personalities of two players in the current U.S. political scene…”

Bobby Hart, a younger and highly respected senator who serves on the Senate Intelligence Committee, is secretly tasked with discovering who had Constable murdered and why. The person making the request/demand is Hillary Constable, the now-widowed first lady. Hillary was well aware of her husband’s penchant for adultery, which was not exactly a secret around Washington. Hart is surprised by the request and agrees to pursue it only with reluctance, given that he was hardly a fan of either the late President or his survivor. The problem that Hart faces is that there are any number of people who might have commissioned the assassination, not the least of whom are Irwin Russell — the former vice president who has ascended to the Presidency — and Hillary herself, who had made no secret of her plans to assume her husband’s position at the end of his second term.

Hart’s investigation, which is carried out with the assistance of one of Constable’s former advisors and a principled investigative reporter, leads him to a mysterious French investment company known only as The Four Sisters. Helmed by the last survivor of a long-powerful French family, it has its tentacles everywhere, including the highest levels of the United States government and beyond. The company is so influential, though, that murder would not even be necessary to achieve its aims, whatever they may be. Hart doggedly pursues the truth, even as everything suddenly and dramatically changes. He finds himself and those associated with him in terrible danger. Surprise follows surprise until a series of shocking revelations occur, leading to a final, almost enigmatic conclusion that one will not soon forget.

HILLARY is as good as it gets. Buffa perfectly captures the public and private personas, moods and personalities of two players in the current U.S. political scene, and in that sense the book may be regarded as a subtle cautionary tale. What is equally impressive, though, is the manner in which Buffa injects the classical thinking and philosophy — the type that is no longer considered important to study — into the proceedings without breaking his stride or missing his beat. This has long been a practice of his and is on full display here. Buy and read HILLARY, and enjoy the work of one of our best authors. And please do so preferably before Election Day.

“If there’s anybody who can mount a challenge to John Grisham’s mantle… Buffa’s the guy to do it.”