“Edgar Award nominee Buffa (The Judgment) brings back his protagonist, famous defense attorney Joseph Antonelli, for the trial of the century. The quick-witted and clever ­Antonelli is asked to defend Sen. Kevin Fitzgerald, who has been accused of and confessed to killing the U.S. president. The accused claims a defense of necessity, which may apply when an individual commits a criminal act during an emergency in order to prevent a greater harm from happening. Fitzgerald, a member of the Senate Intelligence Committee, claims to have information showing his act was for the greater good of the country. Readers will be drawn to Buffa’s riveting plot twists right up to the edge-of-your-seat conclusion. His characters are compelling; the dialog authentic and well crafted.
VERDICT: With the current political upheaval, Buffa’s newest novel hits home in more ways than one. The author draws on his own experience as a criminal defense attorney to render realistic courtroom proceedings. Highly recommended!” 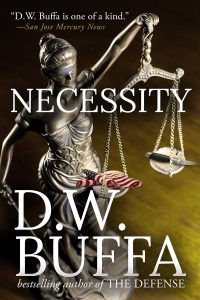 NECESSITY is the riveting new thriller from bestselling Edgar Award nominee D.W. Buffa in which criminal defense attorney Joseph Antonelli finds himself embroiled in the most controversial and explosive trial in American history, representing the man accused of murdering the President.

When renowned lawyer Joseph Antonelli–the defense attorney who has never lost a case–takes on the most shocking and controversial case of his storied career, he has no idea of the depths of trouble he’s about to get into. A man has murdered the President of the United States, but has invoked the “Law of Necessity,” which states that a crime is justified if it serves the greater good and thus prevents a greater harm from occurring.

As the nation watches the trial of the century, Antonelli must try a case with all eyes on him…and his own life on the line.

NECESSITY will enthrall half of the country and infuriate the other half. Everyone, however, will want to read it.

Interview with the author

Necessity offers a brilliant scenario, which in truth is something I had never really thought about.  Several U.S. presidents have been murdered, but none of the killers have ever stood trial…until now, in your book!  How did you come up with the plot idea for this book, and how much research did you have to do before sitting down to write it?

Almost from the moment the election of 2016 was decided, there was talk that something would happen, that the president would never serve out his full term.  Before he had taken the oath of office, there was talk of impeachment, and that raised a question.  If a president was not just incompetent, if he was an actual danger to the country, if his removal from office was the only way to save the country and there was not time for impeachment, what would happen – what should happen – to someone who thought he had no choice, that he had to commit what in an earlier time was called tyrannicide.  That was the question I wanted to explore: whether there was defense, what someone would have to show to prove that he committed murder, not to save himself or someone else, but to save the country.  That is the situation in which Kevin Fitzgerald, a young and ambitious United States senator finds himself.

I did not do anything in the way of specific research before I began to write Necessity.  After  spending much of my life reading and studying history, politics, and law, the book wrote itself.  In the past, when I was working on a novel, I would write a few hours every day and have it finished in four or five months.  I wrote Necessity in forty days, and it was only when I was halfway through it that I realized that the way I had thought it was going to end was not the way it was going to end at all.

This is your first Joseph Antonelli since, I believe, 2005 (Trial by Fire).  Why bring him back for Necessity, rather than write it as a  standalone with new characters?

After seven Antonelli novels, I wrote Evangeline, and then The Dark Backward, in both of which I used a different lawyer, William Darnell, because I wanted someone old enough to remember certain things about the Second World War.  And then, after that, beginning with Helen, which is set in ancient Athens, I wrote some historical fiction in an attempt to show something of the way in which the world, and the way we think about it, has changed.  When I decided to write Necessity, I thought there would would be good reason to have both the crime and the trial take place in San Francisco.  The defendant, Kevin Fitzgerald, is a United States senator but he began his political career as mayor of San Francisco.  I had always intended to bring Antonelli back, and I had always wanted to write another novel in which San Francisco is central to the story, and so it was an easy choice.  I have known him a long time.

It’s noted that you’re a former criminal defense attorney…how did your background as a lawyer help you when writing this book?

It is certainly not impossible to write about the courtroom without having been a trial lawyer.  The best courtroom drama ever put on film is Witness for the Prosecution, written by Agatha Christie.   But it would have been impossible for me to have written Necessity, or any of the other legal thrillers, had I not had that experience.  There is nothing like it.  You can watch trials, and you can read about trial tactics and trial procedure; you can get a sense about what makes one lawyer better, more persuasive, than another; but you cannot know what it feels like, how quick your mind can work, when before a witness is three words into her answer you know not only what the rest of the answer is going to be, but the next question you are going to ask.  You won’t know what it is like when you know that if you make even one mistake the man or woman you are defending may spend the rest of their life in prison, or perhaps even die at the hands of the executioner, for a crime they did not commit.  This is especially true in Necessity, where the defendant confesses to murder, insists what he did was right, insists that when every one learns the reason why he did it, he will not only be acquitted but seen as a great American hero, and still refuses to tell his lawyer what that reason is.

Now that Antonelli is back, can your fans expect to see him again after this book?

Antonelli will be back, not in the next novel, but in the one after that.  The next novel, The Forty Fifth, follows Necessity, and is the third novel in a trilogy about the 2016 election.  It is the story of what might have happened if someone, a conservative in the classic sense who understood the power of language and wanted to restore the predominance of public, as opposed to private, interest, had been elected.  The Antonelli novel is called The Privilege because a new client, once he has the protection of the lawyer-client privilege, confesses to Antonelli that he is responsible for a murder for which Antonelli is defending someone else at trial, a trial Antonelli has no chance of winning.

Lastly, who are some of your favorite authors, and which books are currently sitting on your nightstand?

Two of my favorite authors, both of which I have been rereading, are F. Scott Fitzgerald and Jorge Borges.  Fitzgerald’s The Great Gatsby, which I read for the first time between midnight and four in the morning the night before I left for a summer in New York after my first year in graduate school, a summer in which, because of that novel, seeing everything through Gatsby’s eyes, I kept wondering if I would ever meet a girl that, in Fitzgerald’s marvelous and unforgettable phrase had “a voice like money.”  The short stories of the Argentine writer Jorge Borges, who could put into the mouth of a character of his invention a line I have never been able to forget – “I have often begun the study of metaphysics but have always been interrupted by happiness” – say more in ten pages than most authors could say in a thousand.

What is sitting on my nightstand?  The Roman History of Ammianus Marcellinus, written in the fourth century by a Roman general who, among other things, served under the Emperor Julian.  It is not my fault.  It was one of Julian Drake’s favorite books, and Julian Drake, you will learn if you read The Forty Fifth when it comes out next year, only read interesting things.