Evangeline is a thriller for the soul. Called “engrossing, emotionally-charged and highly thought-provoking,” by readers, this book will shake your deep-seated beliefs and prejudices with its astonishing plot line, engrossing characters and vivid courtroom scenes. 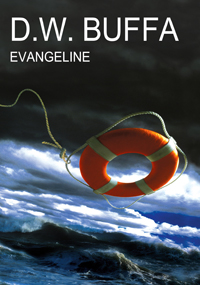 Adrift. No chance of rescue. How far would you go to save your own life?

The Evangeline, the finest ship of her kind, built to sail anywhere in the world, sinks in a ferocious storm off the coast of Africa. A single lifeboat with fourteen people crowded into it gets away. Forty days later, a thousand miles from South America, six survivors are rescued from the sea. One of them, the captain Vincent Marlowe, is charged with murder. His only defense is that it was necessary to kill some to save the others.

Using his intricate legal experience, D.W. Buffa explores whether there are some ethical questions that cannot be decided with man-made laws. The Evangeline is a gripping courtroom drama that destroys our trusted notions of good and evil.

From the author of the acclaimed Joseph Antonelli novels,Evangeline is D.W. Buffa’s eighth book.

“Buffa, himself a lawyer, creates a suspense in the courtroom that is remarkable. Through the individual accounts of the witnesses, a picture of the drama at high sea is vividly described.”
— German Press Agency

“Ever since Moby Dick we fear that the ocean treats human beings by its own rules. Marlowe, a worthy successor of Captain Ahab, was the only one who knew these rules.”

“While reviewers refer to Moby Dick, I found more of Conrad’s Heart of Darkness or a dramatization of the ill-fated Donner Party than with Ahab, in D.W. Buffa’s extraordinary book, Evangeline.

‘It was remarkable, what he did, but how many of us are willing to admit it? And perhaps it is better if we do not; better to preserve our own decent illusion that murder and cannibalism can never be right.’ Despite the startling reference to cannibalism, these words, in the context of Buffa’s book, are soothing and clarifying. They are spoken by an aging attorney, William Darnell, to his best friend Dr. Summer Blaine, while they await the jury’s decision as to the fate of Darnell’s client, Vincent Marlowe.

Marlowe has been tried on the charge of murder, and he insisted on his guilt. But the circumstances and his actions were driven, not with murderous intent, but with the highest of moral principles. Darnell tells us, ‘What happened out there was, in a way, almost biblical. It was the way things must have happened in the beginning, before there was any law, when everyone did whatever they had to do to stay alive — until someone had the wisdom to establish a rule and the strength to make everyone follow it. Someone had to fight violence with violence.’

Such is the dilemma that Buffa sets out for the reader, as he examines the inherent conflicts between the nature of law, and its applications; between the nature of man, and his actions under unique, believable and unbearable circumstances. Evangeline was published in Europe and Australia, where book publishers appear to have greater respect for the intelligence of their readers, than do those in the United States where it is not published. No more gruesome or ghoulish than a typical Patterson or Cornwell book, Evangeline has somehow been informally banned in America. A pity, to be sure, as Buffa is an intelligent and sensitive writer, whose references to moral imperatives and justice are deeply rooted in literature, with antecedents in Conrad’s iconic Marlow character in “Heart of Darkness”, and multiple philosophical challenges.

As a story teller and writer, D.W. Buffa is among the best of the current mix, along with Turow, Leon and Grisham. His sense of irony is supported by an undercurrent of honor and justice. His observations about human nature are evoked through enjoyable and insightful dialogues among several believable, realistic and multifaceted characters. They speak in their own voices, and interact as people do. Not always perfect; often flawed. But always human and true to the story.

Though his exceptional Joseph Antonelli character — known to us from his seven earlier novels — is nowhere to be seen, the older William Darnell, with weakened heart and shortness of breath, is a sage and attractive hero. Darnell’s love for his longtime friend, herself no longer young, is refreshing and brings depth and welcome warmth to this otherwise challenging and highly stimulating book.”